From LPGA, by AP:

BETHESDA, Md. (AP) — This was the moment the rest of the field needed: In Gee Chun standing near the trees, contemplating her situation and then eventually heading back to the point of her previous shot.

A shaky third round cut her lead at the Women's PGA Championship in half.

Chun shot a 3-over 75 on Saturday, leaving her three strokes ahead going into the final round at Congressional Country Club. On a day the leaders had plenty of trouble, Chun was holding her own until she made a double bogey on the par-5 16th hole.  Read more

In Gee Chun saw her lead halved at the Women's PGA Championship but the South Korean is still very much in charge at Congressional Country Club.

Two-time major winner Chun heads into Sunday sitting three shots clear at eight-under-par. A trio containing two of her compatriots, Sei Young Kim and Hye-jin Choi, as well as American Lexi Thompson are five-under ahead of the final round.

Saturday saw the first time Chun has moved backwards, after the 27-year-old broke the course record with an eight-under-par first round, giving her the biggest lead ever held after day one of a major and had a six-shot lead after the second round.  Read more

From Eurosport, by Alex Livie:

The Women’s PGA Championship is back in the melting pot after runaway leader In Gee Chun came back to the field after a horror hole on the back nine at Congressional on Saturday.

The two-time major winner started the third round with a six-shot lead, but things yo-yoed all day - with the advantage fluctuating between seven and three shots.

She ended the day with a three-shot lead, to give a host of players hope of chasing her down on Sunday.  Read more

In Gee Chun will go into the final day of the Women's PGA Championship with a three-shot lead despite shooting a three-over-par 75 on Saturday.

The South Korean world number 33 was overnight leader but struggled to maintain early dominance in Maryland.

She held a lead as strong as seven shots early on, and is still on an eight-under-par 208 overall.

But a bogey and a double bogey on her 15th and 16th saw her advantage shrink down the stretch.  Read more 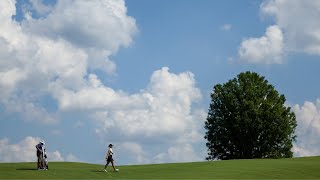