Li Haotong remained on course for a wire-to-wire victory after producing a brilliant 67 on Saturday to take a three-shot lead into the final round of the 2022 BMW International Open.

The Chinese star has been in sensational form all week at Golfclub München Eichenried as he goes in search of a third DP World Tour crown, and first since 2018...

A series of magical moments helped Li pull away from the field on Moving Day, including a chip-in eagle at the sixth and a miraculous recovery shot on the 15th which saw him make a birdie despite sending his tee-shot a long way left.  Read more

From ESPN, by AP:

MUNICH -- Li Haotong had eagle on the same hole for the third day running as he opened up a 3-shot lead of the BMW International Open on Saturday ahead of the final round.

Starting the day ahead by 1 stroke, Li was 5 under for the day and 20 under for the tournament. He was nearly further ahead but for a bogey on the 18th...

Li completed the par-5 sixth at Golfclub München Eichenried in 3 shots on Thursday and Friday, but Saturday was the pick of the bunch as he hit a 21-yard chip into the hole.  Read more

From Planet Sport, by Seb Sternik:

World number 281 Li Haotong has retained his advantage at the top of the leaderboard during a weather-interrupted second-day at the BMW International Open in Munich.

The Chinese player, who tied the course record in the opening round with a 10-under-par 62, enjoyed another solid outing on Friday after carding 67.  Read more

Haotong gave himself a three-shot cushion ahead of the final round, while big-hitting Belgian Thomas climbed the leaderboard on day three of the 2022 BMW International Open.

Here is everything you need to know from the third round at Golfclub München Eichenried. 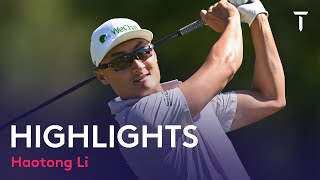