From PGA TOUR, The First Look, by Adam Stanley:

Lucas Glover returns to defend his title with major champions, PGA TOUR winners, and up-and-comers also in the field at TPC Deere Run – with Open Championship spots on the line.

FIELD NOTES: PLAYERS Championship winners Jason Day and Webb Simpson headline the field… Lucas Glover will look to become the first to successfully defend his title at the Deere since Steve Stricker a decade ago…

COURSE: TPC Deere Run, par 71, 7,289 yards. The D.A. Weibring design offers up plenty of birdie opportunities but risk-reward scenarios as well. Weibring, an Illinois native, won the Deere three times before he was tasked with helping to create TPC Deere Run in 1999. There’s lots of dramatic elevation on the course, which used to be an Arabian horse farm. On the same day that Paul Goydos shot the course record, a 59 in 2010, Steve Stricker shot 60.

STORYLINES: The Deere will once again be part of the Open Championship Qualifying Series. There are three spots up for grabs for those who have not already earned a spot at St. Andrews. Still eying a spot: Adam Hadwin, who earned a spot via the Qualifying Series at the RBC Canadian Open in 2019 and finished T7 at the U.S. Open… Five of the last 10 winners of the Deere were first-timer TOUR winners…   Read more 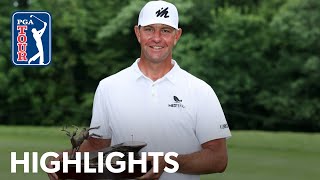