Music and Golf merge in Florida and in Adelaide

From Naples, Florida, by Greg Hardwig:

After being canceled in 2020 due to the coronavirus pandemic, the QBE Shootout’s concert, Live Fest, is back...

Live Fest is just another example of the meshing of golf and music, with many events across all three major tours having concerts as part of their experience.

Fittingly, when Hartman got together with Lady A’s Charles Kelley, whose band played the inaugural Live Fest in 2019, they did on a golf course. In Nashville.

“The snow melted for a day and we were able to get out to play,” Hartman said. “So many of these artists are really embracing the game.

“The melding of music and golf has been around for a while, but it’s only going to get bigger and better.”  Read more

Blitz Golf League’s summer run will feature in three other states before culminating in a week-long South Australian roadshow. Across Adelaide, North Adelaide and Normanville on the Fleurieu Peninsula, three days of play will be accompanied by festival events ending with the National Final on January 9, 2022...

Entertainment at the National Final in Glenelg will include multiple live music acts, DJs and a magician, as well as a fan zone holding competitions and giveaways for guests of all ages, ensuring the action will roll through a stadium hole and the central village non-stop.  Read more here or here. 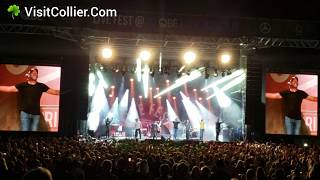