From the PGA TOUR Daily Wrap-up, by AP:

NASSAU, Bahamas — Viktor Hovland made consecutive eagles and closed with consecutive bogeys while overcoming a six-shot deficit to win the Hero World Challenge on Sunday and keep Collin Morikawa from reaching No. 1 in the world.

So wild was this final round of the year for golf's elite that Morikawa, who started the day with a five-shot lead, wasn't even a factor over the last hour at Albany Golf Club.  Read more

From Sky Sports, by Ali Stafford:

Viktor Hovland fired back-to-back eagles on his way to snatching a dramatic victory after a remarkable final round at the Hero World Challenge.  The Norwegian overturned a six-shot deficit on a scintillating Sunday in the Bahamas, carding a six-under 66 to jump clear of a congested leaderboard at Albany and end the week on 18 under.  Read more

From CBS Sports, by Kyle Porter:

In his last two events, Viktor Hovland has not lost to a single golfer. On Sunday, Hovland followed his World Wide Technology Championship at Mayakoba victory from a few weeks ago with a win at the Hero World Challenge over 19 other golfers, 18 of whom were in the top 50 in the Official World Golf Rankings. It was also his third win in his last 12 starts.  Read more

Norway's Viktor Hovland carded a six-under final-round 66 to win the Hero World Challenge in the Bahamas. The 24-year-old shot two eagles, five birdies and three bogeys to finish on 18 under.  Read more 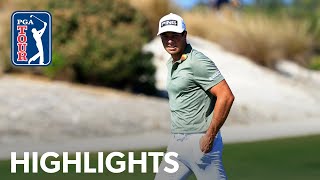