From Yahoo!Sports, by Phil Casey:

Former Open champion Shane Lowry has welcomed the sense of “comfort” given by the strengthening of ties between the PGA Tour and DP World Tour.

In their latest response to the threat posed by the Saudi-backed LIV Golf Invitational Series, the two circuits announced the next phase of their strategic alliance, which was signed in November 2020.

The aim is to counter what Rory McIlroy describes as the “boatloads of cash” offered by LIV Golf which have succeeded in attracting the likes of Phil Mickelson, Brooks Koepka, Bryson DeChambeau and Patrick Reed to the 54-hole, 48-man events, resulting in their suspension from the PGA Tour.

From 2023 the top 10 finishers on the DP World Tour rankings not already exempt will gain PGA Tour cards, with the US circuit increasing its stake in European Tour Productions from 15 to 40 per cent and that money used to guarantee increases in DP World Tour purses for the next five years.

“As a DP World Tour member and PGA Tour member it creates a nice sense of comfort there that the two tours are working together and that world golf is strong going forward,” Lowry said.

“There’s been a lot of uncertainty in golf over the last while and I feel this is great for DP World Tour members. With the guaranteed prize funds for the next few years people can plan their seasons and go out there and play for nice money every week, which is what you want to do as a professional golfer.”

Lowry has made it clear he is not interested in joining the breakaway circuit and is contesting this week’s Horizon Irish Open while the second LIV event takes place in Portland.  Read more 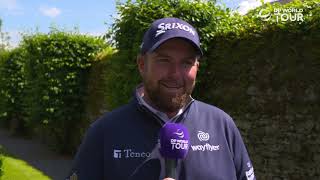