Schauffele leads into final, one ahead of Cantlay

CROMWELL, Conn. (AP) — Xander Schauffele shot a 3-under 67 on Saturday to take a one-stroke lead over good friend and playing partner Patrick Cantlay into the final round of the Travelers Championship.

Schauffele had a 17-under 193 total at TPC River Highlands. Cantlay shot 63.

Rookie Sahith Theegala was third at 14 under after a round of 64, and Kevin Kisner had a 66 to get to 13 under.

Schauffele began the day at 14 under with a five-stroke lead. The Olympic champion birdied the second hole for the third time this week and had another at No. 6, part of a career-best run of 48 holes without a bogey.  Read more

Xander Schauffele has retained his lead at the Travelers Championship but is down to just a single shot heading into Sunday, while Rory McIlroy fell further back after another difficult round.

Patrick Cantlay is the man perched just behind Schauffele on the leaderboard at TPC River Highlands, shooting the best round of the day with a 63.

It means Schauffele's lead has shrunk from five shots to just one, setting up a thrilling Sunday. He is 17-under after the third round, and went bogey-free until the 13th hole on Saturday, where he found the water.

He responded with a birdie on 16 and then both men carded birdies on the 17th, to keep them clear of Sahith Theegala, who sits third on 14-under-par, after shooting a 64.  Read more

The best-buddy duo of Xander Schauffele and Patrick Cantlay made up the final group Saturday at the Travelers Championship. The pair won the Zurich Classic of New Orleans earlier this season at TPC Louisiana and were visibly comfortable throughout the third round.

They’ll be back together Sunday, too.  Read more 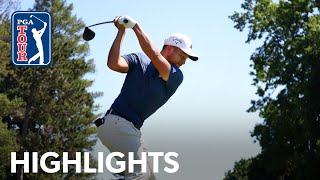