Sarah Jane Smith, "Strengthened by support and experience in final week at Dohan"

That’s the last time Sarah Jane Smith took on the roller coaster journey that is Q-Series, then aptly named the LPGA Final Qualifying Tournament. In 2007, Smith tied for 20th to regain non-exempt status for 2008. Since then, the 37-year-old has earned 24 top-15 finishes, including nine top-10 finishes. This past season, Smith’s best result was a tie for 34th at the Walmart NW Arkansas Championship, one of five times she saw the weekend in 18 starts.

“I had had a rough year and it was from probably July onwards it was in the back of my mind. If I don't start playing better, I'm going to be back at Q-School,” said Smith. “I feel like it was always over my head, and then once Tampa was finished it was like this is what we're doing. There are no ifs, ands or buts. I'm going to Q-School. Let's get ready.”

After four rounds in Mobile at Magnolia Grove, Smith posted 70-73-67-70, easily securing her spot into the second week of Q-Series in Dothan at -6, sitting in a tie for 24th. A lot has changed since her last qualifying appearance, the most obvious being the youngest addition to her family – Smith’s two-and-a-half-year-old son, Theo.  Read more here 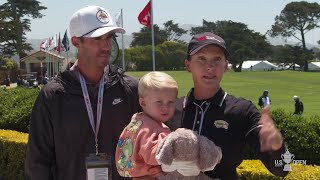