Schauffele wins Travelers Championship ahead of Theegala and Poston

Xander Schauffele won the 2022 Travelers Championship by two shots ahead of J.T. Poston and Sahith Theegala at TPC River Highlands.

The victory marked Schauffele's sixth career PGA Tour win and the first time he had successfully converted a 54-hole lead. He had held a one-shot advantage going into the final round on Sunday after rounds of 63, 63 and 67...

But Theegala would have a nightmare on the 18th. He put himself deep in a bunker off the tee and failed to get out of it at the first attempt. His bogey putt then lipped out and he recorded a double bogey which returned the lead to Schauffele.  Read more

American Xander Schauffele has won the Travelers Championship by two shots in Connecticut. Schauffele, who led going into the final round, birdied the 18th for a two-under-par 68 to finish on 19 under.

Sahith Theegala had taken the lead on the 17th but saw his challenge falter on the final hole as he finished with a double bogey to sit tied for second. US amateur Michael Thorbjornsen fired a second consecutive 66 to finish in fourth place on 15 under.  Read more

The 28-year-old American fired a two-under par 68 to finish on 19-under 261 after 72 holes at TPC River Highlands in Cromwell, Connecticut.

That was enough to defeat Theegala, who fell from the lead with a closing double bogey, and fellow American J.T. Poston, who shared second on 263.  Read more 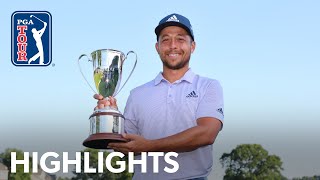