Henrik Stenson was this year's defending champion at the Hero World Challenge, having won in 2019. He has also been runner up, twice. Jordan Spieth won the Hero in 2014, by TEN strokes!

And yet, still it happened. Both received a two-shot penalty and had to replay the shot (for Spieth, it was his second penalty of the tournament).

It's kind of funny seeing them in the press interview above, where at first they endeavour to "get their stories straight", not entirely unlike students called into the Head's office. Then they laugh about it:  "I guess we got what we deserved in the end".   (See the video above)

From Golf Monthly, by Andrew Wright:

And the award for the strangest rules infraction of the year goes to Henrik Stenson and Jordan Spieth. The pair were out in the first twosome of the final round at the Hero World Challenge and were well out of contention when they approached the ninth hole, a 632-yard monster par-5 with water all the way up the right-hand side - not the sort of shot you want to hit twice.

But that is the fate that befell the two major champions after both hit their drives from the wrong tee box.  Read more

From Golfweek, by Steve DiMeglio:

NASSAU, Bahamas – It’s been one of those weeks for Jordan Spieth.

His third round ended when his ball moved on the 18th green and he forgot to replace it before hitting his next putt. That resulted in a two-stroke penalty. Thus, with rounds of 71-72-75, he began Sunday’s final round of the Hero World Challenge at Albany Golf Club in last place.

Then, alongside Henrik Stenson in the first group off, the two were involved in a bizarre penalty situation.  Read more

From Golf Digest, by Dan Rapaport:

NEW PROVIDENCE, Bahamas — The Hero World Challenge is supposed to be a stress-free week. There are only 20 players in the field, it takes place in paradise, and last place still pays $100,000.

Jordan Spieth, however, has managed to get himself into a couple rules imbroglios. Yes, plural.  Read more 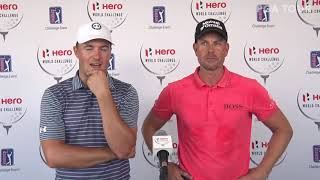